The impressive discography of the Zutphen born Dutch soprano Johannette Zomer includes dozens of recordings of opera, song, canatas and religious music of 1580 tot ca. 1800. On September 21 2018 she makes a unique excursion to the realm of late romanticism with a guest appearance in our Jan Brandts Buys opera concert in Buitensociëteit De Hanzehof (Zutphen). On Sunday September 22 she will also sing an array of songs by Brandts Buys in the Brandts Buys Song Recital in Chapel op 't Rijsselt (Eefde, just outside Zutphen). DThe reason for her interest is the following: Jan Brandts Buys was not just born 150 years ago, butprecisely also in Zutphen, which is the city where also Zomer resides. She spontaneously embraced our initiative to put Brandts Buys back on the musical map of the Netherlands with our own Jan Brandts Buys Festival Zutphen 2018. Although unique is arguably much abused word, there are fine arguments to use it in the case of Brandts Buys: not only did he compose marvellous melodies, but he is also by far the most succesful opera composer the Netherlands have ever brought forth. His opera Die Schneider von Schönau has been performed over 1000 times in the entire German language hemisphere. These are figures that dwarf any other Dutch composer. Also his opera Micarême was a succes and it is precisely from these two titles that Zomer brings highlights at the opera concert. At the Song Recital she will perform an array of songs, among which are also his most popular ones, those with piano and flute accompanyment. She will sing the rarely performed songs with the meander String Quartet, as well as a fine selection of his best songs from various cycles. 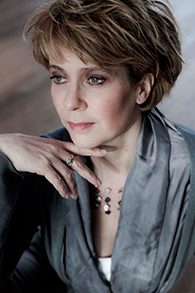 The Dutch soprano Johannette Zomer began her studies at the Sweelinck Conservatorium Amsterdam in 1990 with Charles van Tassel, after having worked as a microbiology analyst for several years. In June 1997 she was awarded her Performance Diploma. Since then she has received coaching by Diane Forlano (London), Claudia Visca (Wuppertal) and Marlena Malas (New York).

Her repertoire ranges from medieval music through all music of the baroque and classical eras, including opera, but also Lieder, French Romanticism and Contemporary music.

Johannette made her opera debut as Tebaldo in Verdi’s Don Carlo with the Nationale Reisopera in October 1996. Since then she has made regular appearances in roles including Belinda, Pamina, La Musica, Euridice, Dalinda and Ilia, and also as Amanda in Ligeti’s Le Grand Macabre and Mélisande in Debussy’s Pelléas et Mélisande.
Regularly she contributes to CD-recording projects. A few of her most recent releases – all very well received in both press and radio – are the Bach Cantatas disc with the English ensemble Florilegium for which she won an Edison Award the cd With Endless Teares with theorbist Fred Jacobs, showing the development of English 17th Century Song –one of the top choices of 2009 on CD Review BBC-, and the cd Love & Madness, a disc with Händel aria’s together with Bart Schneemann, oboe (all on Channel Classics).

In 2013 she founded her own ensemble the Tulipa Consort. She has performed with this new ensemble at the Göttinger Handel Festspiele, and in Amsterdam with Dutch oboist Bart Schneemann.

met Fred Jacobs, theorbe
Bestellen via deze website
This is everything that a recording of French air sérieux should be…Lees meer »