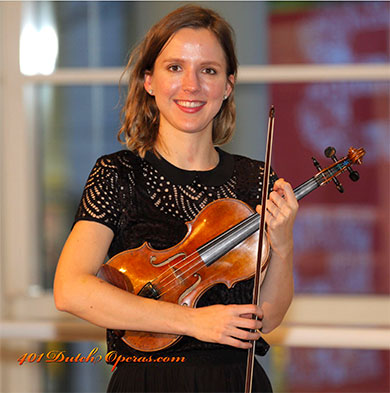 Violinist Anna Hiemstra studied at the Mannes College of Music in New York with Daniel Phillips and Laurie Smukler. As practicing musician Anna appeared North-America, Asia, Europe and South-America, where she shared the stage with musicians such as Vladimir Feltsman, Ani Kava-  an and with members of the New York Philharmonic and the Chamber Orchestra of Europe. In New York Anna was concert master of the dynamic Urban Playground Chamber Orchestra and she played chamber music with the Ensemble Mise-en and the Mimesis Ensemble. Highlights from 2016 were her solo appearances in La Paz with the Orquesta de Cámara Juvenil Bolivia Clásica and a journey to the Philippines where she gave a master class to talented young musicians.

Hiemstra’s contribution to 401Concerts 4 was significant because the violin has grown into a solo instrument in our performances that gives the piano arrangements at key points just that extra bit of punch. It really adds an orchestral  avour in moments like the wonderful moonlight music from Seleneia, the mesmerizing Straussian post- lude following Helga von Stavern’s monologue, or in the evening mood at the end of Act II of Jan Brandts Buys’s Schneider von Schönau, where the violin depicts the romantic feelings that are awakening in Veronika, leading up to her dreamy reflections on them in the shimmering ’En sluipt de liefde door de buurt’.