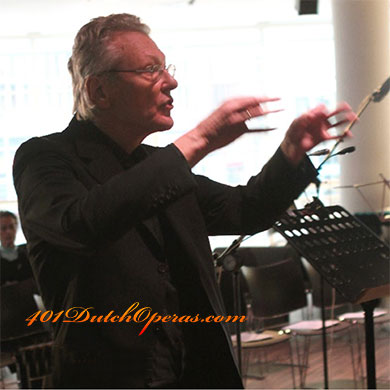 Frits Muusse first appeared in the monks' chorus 'Veni creator' in 'Krassende raven' from Cornelis Doppers' De blinde van Casteel Cuillé in 401Concerts 4, The Hague. The choral element in this opera proved a highlight of the matinee. When plans for further concerts and recordings evolved, Muusse agreed to play a central role in these plans, beginning with the scheduled recording of Jan Brandts Buys' opera Micarême and a session of tenor/soprano aria's and duets with chorus in the Heldentenor recordings we are planning for 2017/2018 with Hendrik Vonk and Barbara schilstra.

Frits Muusse has been active in classical music from early on,  first as a violinist and later also as a singer and choir master. He took vocal lessons with Julia Bronkhorst and Frans van Rooijen, followed by conducting lessons with Hans Matla and later also with Rob Kaptein. In 2014 he attended the famous Kurt Thomas courses. Since then he has participated in numerous choral projects in the Netherlands and abroad. He is appointed conductor of the Hoeksteen Choir in Voorburg.

The 401DutchOperas Choir appears in Marguerite’s madness aria from Dopper's De blinde van Casteel Cuillé, where a procession of monks sings the ’Veni creator spiritus’ while passing Marguerite on their way to the wedding chapel high on the rocks. It is a short section but coming in the middle of the bewildering aria the effect was tremendous. It was the highlight of our previous Kröller-Müller concert, where the lower monks’ part was sung by special guest bass Pieter Vis. The splendid effect soon had me brooding on the idea of having a real male choir there for the Nederlands Muziek Instituut concert in The Hague, which features on this recording. When I met Frits Muusse at a post performance dinner of his voice teacher Julia Bronkhorst, he offered to organize it and thus the 401DutchOperas project Choir was born.