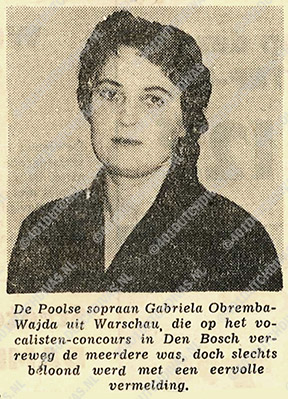 By the time of her 1957 IVC appearance, Polish soprano Gabriela Obremba-Wajda (March 24th, 1927 Mysłowice – January 12th, 1997 Warsaw) had just graduated from the Warzaw conservatory, where she had completed her studies with Madam Stani-Zawadzka. Before singing, she had completed the art academy, where she was trained as a painter. At the IVC she managed to create an almost bitter gap between the Jury o none side, and the audience and the press on the other side. The jury didn’t merit her performances with more than an honorary diploma, whereas the audience had wanted their favorite to win the First Prize in the soprano category. Willem Pelemans writing for Het Laatste Nieuws explains that the reason for this discrepance was the fact that although she lacked in art song and oratorio skills, she was most promising in opera [which was then favored by the audience – RS]. Cornelis Basioski from Nieuwe Haagsche Courant wrote a passionate article that stressed her fantastic accomplishment at the IVC, where she had demonstrated to be the master of ‘a perfectly egalized voice which sounded warm, full and resonant throughout all registers, which were also perfectly blended. A combination of features that not even Gré Brouwnstijn has at her disposal. On top of that her singing had musical allure, she sounded aristocratic’. The caption that accompanied her photo spelled: ‘The Polish soprano Gabriela Obremba-Wajda from Warszaw, who at the IVC Den Bosch was superior, yet reqwarded with nothing but an honorary diploma.’

Apparently, her succes with the audience during the competition was such, that she appeared in concert a mere day after the finals. Although this concert at the Netherlands-Poland Society was not open to the public at large, members of the press were invited and Hst. Fo De Tijd published a rather unfavorable review. He judged her appearance premature: ‘She has some strong points in her voice, but still more weak ppints that should first be devloped. Her voice stiffens and sounds forced in the upper register, while her low notes are weak.Her glory is to bes een in her middle register, where she can surprise one. However, that alone isn’t enough to hold one’s attention fora n entire evening. Especially since her spiritual development is also not on a par wit the emotions she is supposed to express. She was at her best in Lisa’s aria from Tchaikovski’s Pique Dame, where her simple emotions were perfect to convey the worls of the tragic heroine.’ Arguably, this was not just a premature recital, but also a premature review, exept perhaps for the conclusion, where ‘Hst.’ Noted that those invited greatly enjoyed Wajda’s post pauze performance, which was built on a string of Polish folk songs and som art songs by Schubert, Brahms and Schumann that were altready entertaining by the simplef act that most present heard those songs in the Polish language for the first time in their lives.

While still singing, Gabriela never really gave up her work as a painter resumed her career as a painter, as is testified by a 1957 painting that we present in the accompanying slide show. Currently she is most known in Poland in the latter profession. Gabriela Obremba–Wajda was married to the Polish film directorAndrzej Wajda, holder of an honorary Oscar. His most memorable movies are considered to be a trilogy of war films: A Generation, Kanał and Ashes and Diamonds. Gabriela died on January 12, 1997.