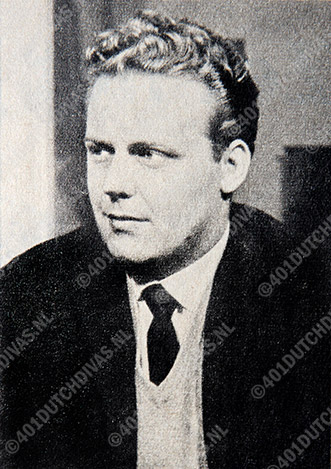 ‘The lane 1940-’45 in Hilversum is a rather quiet lane. Around Nr. 63, people walking bye on afternoons often stop, in order to look up to the second floor. From there, a powerful tenor sound, accompanied from a piano, would frequently come down on them. It was the voice of opera tenor Anton Trommelen practicing.’ (J.J., KRO Gids, 1964)

Anton Trommelen (Loenen, NL, 1933 –) rehearsed mostly in the afternoons, since modern flat buildings had such ‘good’ acoustics, that the neighbors could sing along; rehearsing in the evenings would immediately result in fierce protests. Trommelen is seated in a comfortable chair, his one-and –a-half years old son on his lap until his wife, Louise, saves him from the attempts of the youngster to dominate the interview. Then he recalls his surprise career:

‘My career developed in a most unusual way. At first I wanted to be a stage actor, later I changed my ambition to singing. My father then said that it was all good and fine to become a singer, but not after I went to school to learn some profession. Thus I became a teacher, in Losser, near Enschede, on the German border.’

His professional career emerged from a haphazard participation in the International Vocal Competition in Den Bosch, where he was among those youngsters that Jury members often mockingly described as mere gamblers, young people with a dream that is far larger than their technique, who regard competitions as a tombola. Although such an approach to serious vocal competitions usually results in a swift journey home after having been eliminated during the first round, there are also some rare exceptions to this rule. Trommelen was among the latter category:

‘As a singer, I was discovered over night. Perhaps this sounds a bit odd, even teenybopper-like, but it is the truth. I was discovered in 1962, during the International Vocal Competition in the Casino of Den Bosch, in The Netherlands. I was one of those who just wanted to take a chance. Things definitely weren’t going my way then. It was my first ever appearance before an audience, I was on the verge of a nervous breakdown, and eliminated during the preliminary rounds. Surprisingly, I was still awarded with the Encouragement Prize ‘Toonkunst.’ Thus, my debut in Den Bosch had enormous effects. President of the Jury, Manus Willemsen, head of the music department of KRO Radio, was sure that there was a true tenor hidden I me. He invited me to the KRO studios in Hilversum, in order to make some test recordings in a more relaxed atmosphere. The results were rather promising, although it was clear that I needed to work on my vocal technique. Thus, I started studying in earnest, while under contract with the radio, for a monthly performance there with the KRO Orchestra ‘Chanterelle.’’

Shortly thereafter, Trommelen was offered an engagement with the promenade Orchestra of conductors Benedict Silberman, and Gijsbert Nieuwland.

Regrettably, Trommelen’s salary of ƒ 280 monthly wasn’t sufficient to pay for expensive singing lessons. There was, however, a fine option for such lessons nearby, in the person of Jan Keizer, head of the vocal section of the Amsterdam Conservatory, and then also director of the Overijssel Opera. Trommelen started working overtime by giving gymnastic lessons post-working hours, which brought him enough money to pay for lessons with Keizer. He worked with Keizer for two years, before continuing his studies with Anton Eldering, who taught him the trade of singing Lieder. By 1963 he moved to Hilversum, in order to become a professional singer. Apart from his radio appearances, he teaches singing to the pupils of the Titus Brandsma College. At the time of the interview that we presented above, Trommelen was still studying himself, in order to perfect his technique. He was aided in this by the bass David Hollestelle, who shared his admiration for Trommelen’s voice with Manus Willemsen. Trommelen: ‘I turned to Hollestelle also, with the aim to master singing in oratorios.’

The interview was published in the wake of a 1964 radio appearance, where Trommelen sang radiant performances of arias from Lehar’s Schön ist die Welt, and Das Land des Lächelns. In addition, he sang a captivating rendition of ‘Das Wolgalied.’ These excerpts show a lyric tenor voice with a spinto extension that gave these lightweight pieces a heroic ring, much in the way Tauber made the best of them. In terms of sheer voice, and timbratura, Trommelen certainly belonged to the top category of Dutch tenors in the 1960’s and 70’s. Given his numerous radio appearances, surprisingly little is known about him. However, the full impact of his voice is unmistakably there in the excerpt presented above of ‘Schön ist die Welt,’ and the second one below, Léhar’s ‘Wolgalied.’