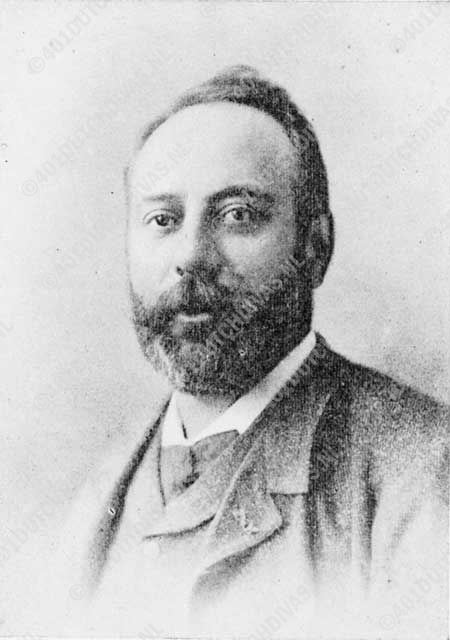 " ... the finest Gurnemanz after Scaria (Emil Scaria, 1838-1886) was the Fleming Emile Blauwaert. Once he even recalled to Scaria. Pity that he hadn't talent for stage-actor at all. Blauwaert however was a great artist and a real gifted singer. It was about 1873, when he visited Amsterdam for the first time and sang during a concert with the Amstels Mannenkoor (Amstel Man-choir) in the old, beautiful Parkzaal the simple song of Willem de Mol: "Ik ken een lied dat 't hert bekoort." (I know a song that delights the heart) He sang it everywhere, and if he didn't sang it right into the hearts of the auditors, for sure it shouldn't reached with difficulty as many as ten reprints. In Flanders as well with Peter Benoit and Jan Blockx *), as in this country with Nicolaï and the family Brandts Buys **), and everywhere where choir works in Dutch language were sung, he was the celebrated bass. Also with an opera of the Belgian composer Jos. Mertens, "le Capitain noir", he appeared in this country ... "
Anton Averkamp, 1928
*) Flemish composers **) Dutch composers

Emile (Emiel) Blauwaert was born in St. Niklaas on 13 June 1845. He studied singing at the Conservatory of Brussels with Eugene Goosens and Henri Warmots (a famous tenor at the Munt in those days). In 1883 he sang mainly at the Opera of Paris and in the Lamoureux concerts. Also in that year he sang the role of Hans Sachs in a concert performance of Wagner's opera Die Meistersinger von Nürnberg. Walther was sung by a still young tenor: Ernest van Dyck.

In 1886, before he left Paris and started his further career, he made his opera debut at the Munt, in the première of Benoits' opera Lucifer.He sang in many other theaters in Belgium, as in Bergen (Mons), Antwerp and Bruges. In the season 1867-1868 he sang with the Flemish Opera in the Theatre de l'Alhambra at Brussels. In 1889 he sang in London as well as in Bayreuth, where he was highly appreciated for his performance of Gürnemanz in Parsifal. One was unanimously of opinion that his creation, surpassed those of his predecessors. Parsifal was sung in this performance by Ernest van Dyck. Just as most of other singers of Flemish origin in those days, he had no trouble at all with the Wagner repertoire, including the French translation of this work.

In the Netherlands Emile Blauwaert appeared a few times in concerts given under auspices of the Wagnervereeniging (Wagner society). The first performance in which he sang took place on 2 December 1887. It was a performance with several soloists, among them Aline Friede and Johannes Rogmans. There were given works of Beethoven, Mozart, J.Arcadelt, Spohr, N.W.Gade and of course of Richard Wagner. On 13 January 1888 Blauwaert sang in a concert performance, this time exclusive devoted to Wagner parts of Parsifal, Die Walküre (Walkürenrit) and more parts from Gotterdämmerung. On 27 April of the same year he sang in a Wagner concert with fragments of Lohengrin, Tristan und Isolde and Die Meistersinger von Nürnberg. The other soloists: Pauline Mailhac, Lena G. Meerum Terwogt, Ernest van Dyck and C.Thole. His last performance for the Wagnervereeniging was on 16 January 1991, a concert with parts from Parsifal and Tannhauser. Unfortunately Blauwaerts was ill and had to sing his part, Gürnemanz in Parsifal from a chair.