There are voices, which - when I heard them for the first time - made a deep and unforgettable impression at me. Magda Olivero with "Del sultano Amuratte" from Adriana Lecouvreur and Rosa Ponselle with the aria "Suicidio" from La Gioconda of Ponchielli for instance. But above all, in the fifties Kathleen Ferrier with the great aria from Gluck's Orfeo: What is life? (Che faro senza Euridici). A contralto with an exceptional beautiful voice, a voice that can move, as in Mahler's 'Abschied' from Das Lied der Erde, but also is capable to sing simply folk songs such as 'The stuttering lovers' or 'Blow the wind Southerly' on a way that is exemplary. A reviewer of the 'Punch' described, after a performance of Mahler's 'Das Lied von der Erde' the effect of her voice as follows .......' And in the 'Abschied' a knell tolls as if for the whole of creation. Days afterwards I still seemed to hear that haunting, heartbreaking Farewell and Kathleen Ferrier's glorious voice singing ... Ewig, ewig, ewig ... across time and space'. 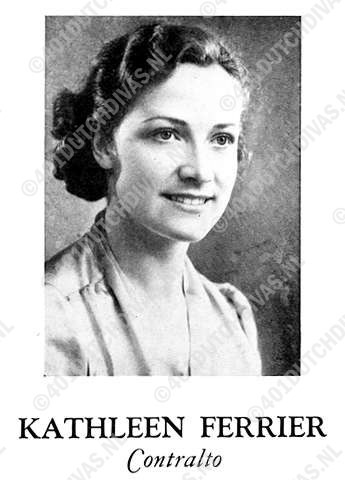 Her first publicity leaflet, 1942 - The Cover

Miss Kathleen Ferrier, a new singer of remarkable talent, was heard yesterday in the Houldsworth Hall, Manchester. A full, rich contralto voice, flexible throughout its compass and capable of lovely shades of tone and expression, is rare in these days, and as the possessor of such a voice Miss Ferrier is far better equipped by nature than are many contraltos who enjoy considerable fame. And she sings with feeling and intelligence, using her vocal gifts as the servant of her temperament. G.A.H.-Manchester Guardian

Whoever induced Kathleen Ferrier to sing at the concert given by Leslie Bridgewater and his salon orchestra on Saturday evening has my gratitude. She is a great contralto, and one worthy to be mentioned as a possible successor to Clara Butt. It is a long time since we heard anyone sing Handel's "Where'er you walk" with such telling simplicity and dignity. It was just plain, honest singing without any frills, but with the effortless charm of the artist. She has range and quality of tone. Liverpool Evening Express.

The Messiah Performance was enriched by a beautiful rendering of the contralto part by Kathleen Ferrier. Her voice had a lovely creamy quality. The air "He shall feed His Flock" glowed with tender conviction. The significance of "He was Despised" was deepened by beauty and sincerity of expression.
Evening Chronicle, St Annes-on-Sea

Miss Kathleen Ferrier sang with great charm and sincerity. She was good in the dramatic part of the Queen when singing with the chorus, in the solo "Woe unto them," and in the aria " O rest in the Lord." This was rendered with great sympathy and expression. Miss Ferrier has one of the purest contralto voices, and she left the impression that she will be one of the country's leading oratorio singers in the near future.
Runcorn Weekly News

EXTRACTS FROM PRESS NOTICES Quoted in the leaflet, 1942

On CD (Globe) are 22 songs by Johannes Brahms released, which is accompanied by Sylvia Schlüter Rudolf Jansen. But works by Bach, Mozart, Stamitz and Diepenbrock and other works of Dutch composers by Sylvia Schlüter played and recorded on CD.