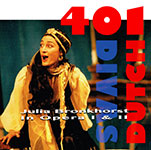 The versatile soprano Julia Bronkhorst made numerous notable recordings in less known repertoire, among ese many Dutch song recordings and productions that were oriented toward South-African song repertoire. We bring an extensive portrait of this modest Diva whom we have followed with the video camera for some years. This resulted in unique world premiere recordings of Leo Samama's 'Ubuntu' and Caroline Ansink's opera Polish jews in Plan South. Six downloads and an array of photographs and videos provide a complete survey of her career since 1987. 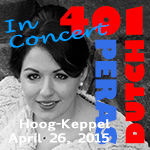 Flemish soprano Jolien De Gendt appeared at the very first 401DutchDivas concert of April 26, 2015. we selected her for this historicconcert with Dutch and Flemish opera arias and duets after she enchanted us during a Lyrica Ghent performance of Miry's Bouchard d'Avesnes and later also as Blondchen Mozart's Enführung. 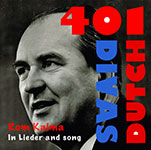 The Frisian bass-baritone Rom Kalma had a celebrated concert and oratorio career in the Netherlands and Germany from the 1950's to the 1970's. 401DutchDivas honors him here with an extensive biography with lots of sound and vision as well as with 5 downloads: in Lieder, Opera, Oratorio, Popular Song and a video of Die Winterreise. 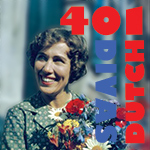 The world famous Dutch alto Aafje Heynis passed away from 17 on 18 December 2015, at the age of 91. 401DutchDivas looks back at her career in an exclusve English language portrait, with extensive interview excerpts in a special page. 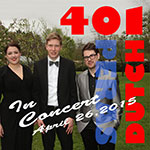