‘With Pompeiu Hărăşteanu another highlight of the semi finals arrived to the test, even if he sang in a slightly exaggerated, theatrical manner without diversifying much between the various genres of opera oratorio and song. Having said that, I point here to his ringing voice, and a timbre so beautiful that a place in the finals can hardly escape him.’ (Johan van Dongen, Eindhovens Dagblad, September 10, 1965)

‘Conveying true meaning, dramatic expressing, and a musical conscience are the stuff that the University of Singing requires, and this was wholly realized in the likes of Sigmund Nimsgern and Pompeiu Hărăşteanu, also blessed with an immaculate technical mastership’ (Gerard Verlinden, unidentified Newspaper Clipping, September 13, 1965) 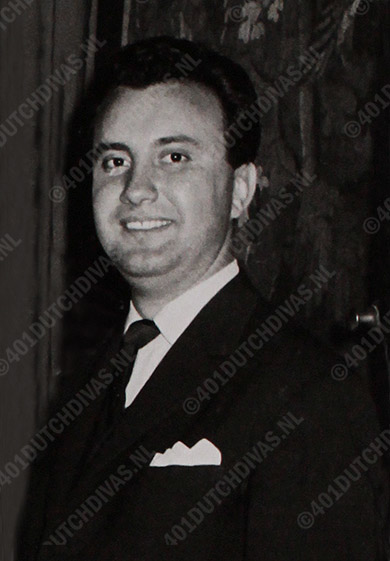 Romanian born bass Pompeiu Hărăşteanu (Gheorgheni, Harghita, Romania, September 14, 1935 –) graduated from the Conservatory Porumbescu, Bucharest, 1959. His principal teacher there was Petre Stefanescu Goangă. By 1960 he won Second Prize at the International Singing Contest ‘Erkel’ in Hungary. The prize money awarded to him there was spent in a most untypical way, says the bass:

‘I bought a tape recorder from that money, which I then used to tape my father’s singing. He was singing so beautifully, and I treasure those four songs that I recorded with it.’

His early success at the Hungarian ‘Erkel’ vocal competition was followed by a last minute debut as the bass in Lohengrin, with the Romanian National Opera on tour in Berlin. Hărăşteanu:

‘The original bass had fallen ill, and they asked me to replace him at extremely short notice, even though I did not know the part. That gained me some credit.’

The next significant moment came when he obtained a prestigious Second Prize at the International Vocal Competition in ‘s Hertogenbosch, amidst an exceptionally strong field of competition, among them First prize winners Ileana Cotrubas, Viorica Cortez, and Sigmund Nimsgern. Hărăşteanu:

‘Winning in Den Bosch with my colleagues Viorica and Ileana was of major importance. I still remember my first visit to The Netherlands, the museums, the aiport…’

His IVC victory was followed by his debut at the Bucharest National Opera in 1966, as Ferrando in Il Trovatore. Hărăşteanu has no problems to reflect on the politics behind all the early stages in his career, where one thing resulted into the next, but always carefully planned and programmed by the Ministry of Culture. Hărăşteanu also sheds light on how his participation to the international competitions materializes:

‘My success in Den Bosch resulted in the Ministry offering me to participate in further competitions, such as the International Competition ‘George Enescu’ Bucharest, where I obtained another Second Prize, and then the International Singing contest ‘Francisco Viñas’ in Barcelona, 1968, where I won the First Prize. That victory finally resulted in an engagement with the Bonn Opera House in Germany, where I was engaged for three seasons, after which I returned for a permanent engagement with the National Opera Bucharest. Those were difficult times, since the Securitate did not trust me to return. I had trouble with the secret service, and only after I had accepted to return, things calmed down.’

His debut role in Bonn was Sarastro in Die Zauberflöte. He sang as a soloist for the Opera Bonn, Germany, between 1968 and 1972. During this period he sang on several stages of the world, alongside vocal giants such as Aldo Protti, Elena Obrasztsova, Giuseppe Di Stefano, Giuseppe Taddei, Nicolai Ghiaurov, Carlo Bergonzi, Agnes Baltsa, Renata Scotto, Nicola Ghiuselev, and such conductors as Karl Böhm, and Herbert von Karajan. The latter conductor led a performance of I Lombardi at the European Music Festival in Berlin, starring Hărăşteanu. Another memorable moment came in 1969, when he arrived to Bonn:

‘One day, while vocalizing, the Artistic Director came to see me. He said that he had heard me sing in Beethoven’s ‘Ninth Symphony,’ and wanted to know if I could sing in the Beethovenhalle, that very night. The bass was indisposed and they were looking for a replacement. I agreed to go to an audition - I was then about 26 to 27 years old, and did not know many people abroad... So I went to the audition, where I met a short, slightly corpulent man, who asked to hear me – the conductor. I sang and was accepted. Later I asked the Artistic Director after the name of that conductor. His response left me dumbfound: ‘Karl Böhm’ I went to Böhm, appologized, and he just laughed and patted me on the head. It was a great concert and one of my happiest days in Bonn.’ 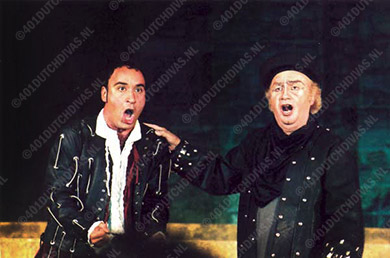 From 1972 onwards, Hărăşteanu was a soloist of the National Opera in Bucharest. Among his many recollections of those years, stand out his performances at the Bolshoï Theatre Moscow. Hărăşteanu:

‘The Russian harmonica that I found on my way back from Russia after the War, was the first gift I received from that country – it tuned my heart to music. Later, I sang at the Bolshoï three times, with the Romanian State Opera. I was Evgeni Onegin there, then also Enescu’s Oedipe.’

Pompeiu Hărăşteanu was known for his powerful low notes, and for roles such as Osmin in Mozart's Die Entfuhrung aus dem Serail, and Sarastro in Die Zauberflöte. The composer dearest to him, however, is doubtlessly Wagner. Hărăşteanu:

‘My teacher, Goangă, pointed me to him, although I did not immediately understand Wagner, when I first heard Der fliegende Holländer. When I studied Die Walküre, though, the course of my life was determined. I was learning with my headphones on, and at one point my wife asked me why I was crying; I couldn’t control my emotions. I could not even talk about what I felt. Such divine music as the Walküre finale has never been written before, or after. ‘But why are you crying,’ she asked. And I replied: ‘Because of the beauty I hear in my ears.’ When I returned home from Bonn to Bucharest in 1971, my first appearance was in Lohengrin.’

Director of the National Opera Bucharest

Apart from his singing, Hărăşteanu also made an impact on the Romanian musical scene as a teacher, and as the General Director of the National Opera (from 1995 to 1997, interim 2001). For his achievements in Romania, he received the Order of Cultural Merit class II (1986), and the National Order of Merit Knight (2002). He never really retired; as late as 2011 he was still performing at the National Opera, and at the Bucharest Comical Opera for Children. At the time of writing, he treasures his work for the Comical Opera for Children in Bucharest: ‘Children take to opera as ducks to water, it's amazing. I do some tricks in Il barbiere di Siviglia, coming up with a flashlight, looking for Don Bartolo among them. All eyes are on me searching Bartolo, and they start helping me search, shouting: ‘We’ve seen him, he’s there,’ says Hărăşteanu full of enthusiasm. His love for the young has a sad edge, though, for when his wife Mariana was pregnant in 1966, they did not have ‘received’ a house (this was decided by the government at that time), so they decided to postpone having children, and his wife underwent a then illegal abortion (Ceaușescu had then forbade abortions, aiming to create a powerful country by numbers). As a result, 15.000 women died in illegal abortions. Hărăşteanu’s wife survived, but she couldn’t have children afterwards, which has been the one regret in his life:

‘I would have loved to have a little girl, but now the children visiting the Opera for Children performances are my children, and so are my many pupils at the University.’ 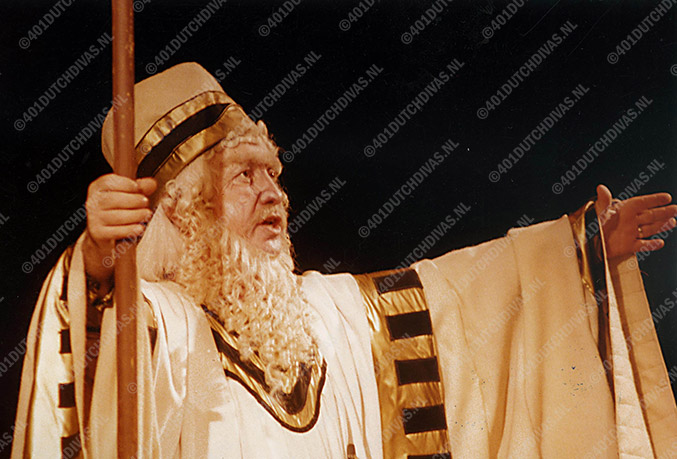 Even over 75 years of age, he continues to work in the field, since, in his own words:

‘When I’m not working I feel useless on this earth, what to do then? Watch TV? No. As long as there is a stage for me, I’ll clim onto it.’

Thus, he was performing Zaccaria in Nabucco at the National Opera Bucharest as late as 2011, in a festive performance commemorating 110 years since Verdi’s death.

To demonstrate that time only make his heart any older, Hărăşteanu claims that his favorite role is the one of the old man who wants to marry the young girl: ‘Don Pasquale!’ He has enough stories for a hundred books, and even contemplated writing at least one book filled with funny anecdotes. Lack of time prevented him until 2010/2011, when he was still teaching at the universities of Bucharest and Constanta, while being a performing artist at the National Opera, touring the country and abroad. Hărăşteanu:

‘I never ever dreamed to still be performing leading bass roles in Aida, Faust, Evegeni Onegin, Samson et Dalilah, and Nabucco at 73 years old. No one has ever achieved that, nowhere. I bless my health, that kept me strong. Otherwise, the ‘secret’ would simply be that I was always very studious and in love with singing. I have always vocalized daily, 10 minutes, a quarter of an hour, half an hour, whatever was possible. When I was director of the Bucharest National Opera had a secret basement room in which I was doing and vocalizations. I was a musician who gave importance to the labor; just like an athlete, you must train yourself for the task. Secondly , I think it was important that I had balance in my life. I never looked for excess of any kind. I had fixed schedules that I respected for decades and I've learned a few things from colleagues. One of the artists who influenced me the most in this regard was tenor Lando Bartolini. He pointed me to yoga. Yet, in the end, I believe that a single phrase will do to summarize my artistry: ‘Before anything else, I loved my mother, art came on the second place.’’