.....Half-way Van Kralingen joins in. The old soprano stands at the left side of the grand piano, beside the pianist. The young soprano opposite them. Both lean on the black polished wood of the instrument. Both stretch their backs, the legs tight. Both on tiptoe, the singing mouths only a few inches apart. A great part of the audience is sitting a little bit more to the front.......after the final phrase Van Kralingen embraces the old mistress........

from a report in 'Vrij Nederland', oktober 1987 after a masterclass with 'Frau Professor' Schwarzkopf

This time for a change a young Dutch talent, the soprano Miranda van Kralingen. I've heard her several times during concerts- the first time in an oratorio of Haydn - and I am much impressed by her very enthusiastic way of singing. The coming season she performs the role of Leonore in Beethovens Fidelio and I'm curious how she sings comparing her great predecessor Gré Brouwenstijn.

During a master class given by the famous German soprano Elisabeth Schwarzkopf in September 1987 in the 'Amsterdamse Concertgebouw' Miranda van Kralingen was graduated from the catogory 'Young Dutch Talent' to the 'catogory of international sopranos', coached on base of Strauss' Vier letzte Lieder. Elisabeth Schwarzkopf chooses also the young soprano for the final concert - with a.o. Strauss' 'Vier letzte Lieder' which was directly broadcasted by the Netherlands radio. The 'De Maes & Lunau Award' get Miranda van Kralingen a place in leading vocal circles in the Netherlands. Miranda van Kralingen worked together with conductors as Bernard Klee, Hans Vonk, Roelof van Driesten, Jan Stulen, Lev Markiz and Hartmut Haenchen. She appeared in oratorio of Haydn, Beethovens Ninth' Symphony, Mahlers Second Symphony (together with the much promising young alto Margriet van Reisen). At the 'Nederlandse opera' she sang among others a leading role in the world premiere of Louis Andriessens' 'Rosa, a horse drama'. At 'Opera Zuid' she was to hear as Mimi in Puccini's La Bohème. In 1988 she made a concert tour through Indonesia and Australia. Her concert in Australia was a gift from the Dutch Queen Beatrix and Prince Claus during the state visit they offered to the Australian government. Abroad she appeared many times at the 'Komische Oper Berlin', where she was praised for her interpretation of Leonore in Beethovens Fidelio in 1997 under stage-management of Harry Kupfer. Further she appeared in Schönbergs 'Von Heute auf Morgen' (1995), Katja in 'Katja Kabanova', Donna Anna in 'Don Giovanni' and Ellen Ford in 'Peter Grimes'. On this moment she rehearse for Tosca at the Welsh National Opera and the coming season she will sing again as Leonore in Beethovens 'Fidelio', now with the 'Nationale Reisopera'. Besides her many opera activities Miranda van Kralingen gives regularly Lieder recitals with pianist Tan Crone. Recently - July 2001 - Schumanns 'Frauenliebe und Leben' during the Orlando Festival. 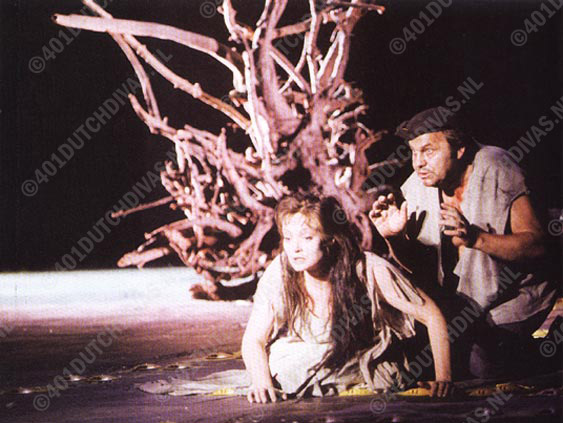 Miranda van Kralingen (Fewronija) and Günther Neumann (Grisjka) in 'The myth of the invisible city Kitesj and the girl Fewronija' of Rimski-Korsakov in a performance of the Komische Oper Berlin 1996. 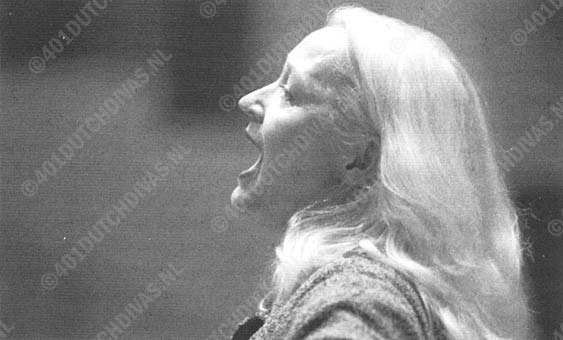