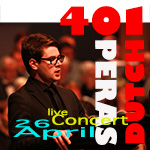 In 2013 we were so enthusiastic regarding tenor Denzil Delaere's appearance in Miry's Charles Quint, that we made him divo of the month. We promised him that we would invite him to our own 401DutchDivas concerts, which we wereplanning to organize. On 26 April 2015 he ultimately appeared at our concerts, together with soprano Jolien De Gendt , in a unqiue program of arias and duets from Dutch and Flemish operas.