" ... meanwhile this energetic and extremely gifted singer has sung over and over again with an orchestra ... I remember besides, a beautiful reproduction in the Concertgebouw of the soprano-solo in the Stabat Mater of Pergolesi ... "
G.S. de Bossan, July 1941

"... in the second half of the program, that I heard of Betty van den Bosch and the pianist Felix de Nobel, both gave evidence of a great expressive ability ... something really happened here ... "
newspaper article, 1945 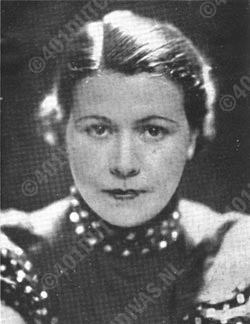 Betty van den Bosch was born on March 19th, 1900 in Rotterdam. She started her singing study with Anke Schierbeek in Amsterdam, but finished her training nevertheless mainly abroad. At first at the Koninklijk/ Royal Conservatorium in Brussels and afterwards in Munich with J.Stückgold and in Paris and Berlin. Before she returned to The Netherlands about 1930, she sang two seasons light soprano parts with the operas of Lübeck and at Trier.

In The Netherlands she was quick well known by her appearances with Louis Bouwmeester's company Die Haghezangers (opera-comic). A company, mainly specialized in the French operetta repertoire. This doesn't satisfied her on the long run, so she continued her singing study to specializes more to the classical repertoire and mainly the art of the Lied. 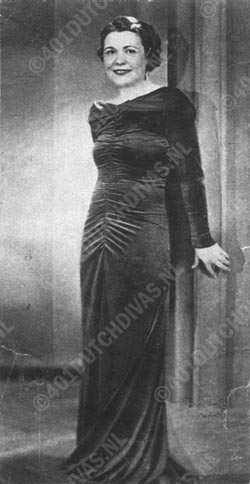 With lied/song recitals she debuted in 1935, afterwards she appeared regularly, in the Netherlands as well as in the well known music center of a.o. London, Berlin, Vienna, Copenhagen and Stockholm. She sang with conductors as Willem Mengelberg, Eduard van Beinum, Bruno Walter, Oswald Kabasta, Fritz Busch, Erich Kleiber, a.o. In 1937 she made a great tour through the former Dutch colony Nederlandsch Oost-Indië (Indonesia). Also a tour through the U.S. was planned, but could not happen, because the break out of the Great War. In the beginning Betty van den Bosch started as a mezzo-soprano, but end thirties she also sang soprano parts. 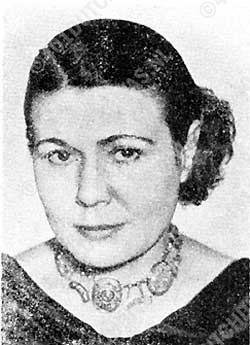 In operas she appeared only a few times. In 1935 she performed the role of Undine in the same named opera of Lortzing and on September 8th, 1938 she sang in Ermanno Wolf-Ferrari's Le donne curiose. This was a performance under auspices of the Wagnervereeniging/ Wagner society to honor the '40-years jubilee' of Queen Wilhelmina. In that same year she sang - still as a mezzo-soprano - also under Bruno Walter in a concert performance as Eglantine in Weber's Euryanthe, together with Hilde Konetzni, August Seider and Hans Hotter. Shortly there after she sang in Kor Kuiler's (Dutch composer) opera Saskia, performed with great success in Groningen.

On 30 May 1940 (Germany invaded The Netherlands on May 10th and the country was trampled on within 5 days!) she cooperated at the celebration of the 100th year of birth of Tsjaikovski (1940), where she sang under the baton of Eduard van Beinum arias from The virgin of Orléans and Jevgeni Onjegin.