Tenor legend Siegfried Jerusalem comes to Den Bosch in The Nethelands for the Wagner Academy of the International Vocal Competition IVC. He is accompanied by such notable Wagner singers as Nadine Secunde, Dunja Vejzović, and Wolfgang Brendel. Luister Magazine author and 401DutchDivas Editor in Chief René Seghers flew to München for an exclusive feature interview that will be published in the September/October issue of Luister magazine. By means of appetizer, here's an excerpt of the filmed interview, that will later appear here in its entirety.

The International Vocal Competition (IVC) marks the 200th anniversary of the birth of Richard Wagner with the organisation of a Wagner Academy for young professional singers. This special seven-day course will focus on the operas and songs of Richard Wagner and will be held from 22 – 28 September 2013 in the Theater aan de Parade in 's-Hertogenbosch and the Conservatorium van Amsterdam in the Netherlands.

The IVC has engaged internationally-renowned Wagner singers as masters for the Academy. These are soprano Nadine Secunde, mezzo-soprano Dunja Vejzović, tenor Siegfried Jerusalem and baritone Wolfgang Brendel. The conductor Ed Spanjaard, who recently conducted Wagner's complete Ring des Nibelungen for the Nationale Reisopera, will also share his knowledge of Wagner's music with the singers chosen. Peter Lockwood from Amsterdam Opera DNO and Klaus Sallmann from the Berliner Staatsoper will coach the participants and accompany the master classes.

To sing Wagner requires considerable technique and stamina. Musically speaking, singers have to concentrate on chromaticism and the relationship of the vocal line with the orchestral accompaniment as well as the use of Leitmotiven. With regards to the text, Wagner singers have to be comfortable with assonance, alliteration and advanced grammatical constructions; all of these require a real mastery of the German language.

During the Wagner Academy there will be master classes, lectures and films that will be open to the general public. The lectures and films have as a starting point the spectacular staging of the Ring des Nibelungen by director Patrice Chéreau and conductor Pierre Boulez at the Bayreuth Festival in 1976, held in the context of 100 years of Bayreuth. The Wagner Academy fringe program is part of the project 'I saw the world end' by the Pierre Boulez Foundation, a division of "2015 – Boulez 90". 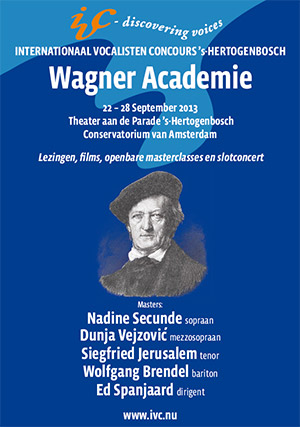 The Wagner Academy has been made possible thanks to a collaboration between the IVC and the Pierre Boulez Foundation, the Wagner Society Netherlands, the Gustav Mahler Foundation Netherlands, the Conservatorium van Amsterdam and the Theatre aan de Parade 's-Hertogenbosch.