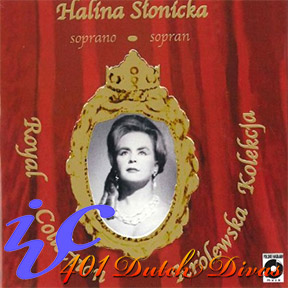 Halina Słonicka's voice was described at the contest as 'of celestial beauty, and great clarity' (Leo Hanekroot in De Tijd). However, the same critic accused her of being a tasteless crowd pleaser, who crooned her way through Duparc's 'Extase', whereas her Mimì was too much of a showpiece with too less of heart. Great through, was het aria from Les pêcheurs de perles. Rather than cultivating her voice, the critic found her 'exploiting' it. How differently F.H. described the same thing for an unknown newspaper, with respect to Słonicka's rendering of 'Si mi chiamano Mimì' from la Boheme, in the final concert:

'Vocally, the aria posed no difficulties to her whatsoever. Moreover, she proved to be a born opera singer in the charming way in which she exploited the possibilities to act out the part, the role of ingénue fitted her like a glove.'

Fortunately for Słonicka, history proved the diva right. She enjoyed an impressive operatic career in Poland, where she was the leading diva of the Warsaw State Opera House for decades. She made numerous recordings and her voice is further preserved in a great deal of live recordings. She pioneered in Moniuszko, excelled in song and as late as 1984 she starred as a singer in the movie Rok Spokojnego Slonca, by Krzysztof Zanussi. Set in Europe after World War II, the story centers on the love affair between a traumatized American soldier and a Polish refugee. Her art, both with respect to the impact of her voice as her tendency to turn any given music into a showcase for her powerful instrument, is amply demonstrated in this 1964 recording of an aria from Moniuszko's Hrabina:

More info on/ or photographs and recordings of Halina Słonicka are welcome. Should you have anything to add, please contact us This e-mail address is being protected from spambots. You need JavaScript enabled to view it