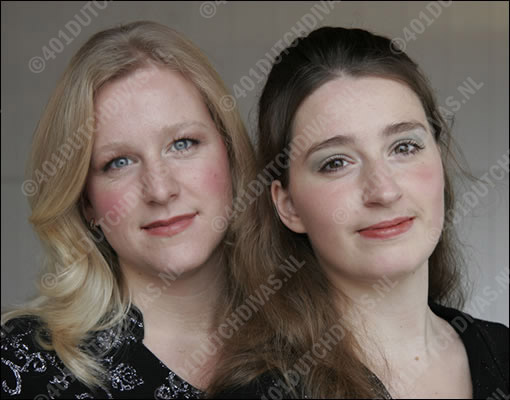 In 1997, the sisters were the first to win the Prinses Christina Competition for vocalists. As a result, they toured through America as soloists with the Haydn Youth String Orchestra. The result of this cooperation can be heard on CD. Before winning this competition, they already attracted attention by singing the part of Dido and Belinda in Purcell’s ‘Dido and Aeneas’, both in the Netherlands and Germany. They performed with the Johan Willem Friso Chapel and sang parts in ‘Lucia di Lammermoor’ (Donizetti) and Orfeo (Gluck) in the Groningen Summer Opera. Other concert tours sent them to Venezuela, the United Arab Emirates and recently to South Africa.

Reviews of the 2001 New Year concerts of the Northern Netherlands Orchestra were without exception favourable. In collaboration with the National Philharmonic Orchestra (which consists of members of the Radio Philharmonic Orchestra), Charlotte and Josefien presented their album ‘Unique Harmony of Two Voices’. Their performances on television in ‘Una Voce Particolare’, ‘De Plantage’ (the plantation) and on Queens Day 2002, when the Dutch queen visited Meppel, were all noteworthy. Furthermore, they performed in the series of the ‘Amsterdam Prinsengracht concerts’. As young talents, they could be heard on Dutch national radiostations Radio 4 and the so-called Concertstation.
Performances in choirs, orchestras, lunch-time concerts: Charlotte and Josefien have acquired a lot of concert experience, also in the oratorio circuit (St.Matthew’s Passion, St. John’s Passion, Messiah, etc.).

They sang modern music as well. For instance, Charlotte sang Berio’s ‘Folksongs’ and Ton de Leeuw’s ‘And they shall reign forever’ in Christofori conducted by Jurjen Hempel in Amsterdam. In Utrecht, she sang Corean composer Sukhi Kang’s ‘Buru’, conducted bu Harry Sparnaay. Josefien participated in the Opera ‘Writing to Vermeer’ by L.Andriessen and ‘Miroir de Peine’ from H. Andriessen is part of her repertoire. In addition, they played a major part in productions of the Van Gogh opera ‘Het Uitstel’ (the delay), written by her father, Willem Stoppelenburg, and sang pieces specifically composed for them by various Dutch composers (Westra, Heeringa, Ziblat, Nederpelt).
They attended various masterclasses, among others of Henk Smit, Kurt Widmer (in Basel, Switzerland), Julia Hamari (Vienna) and Birgitte Fassbaender (Kufstein. Austria). 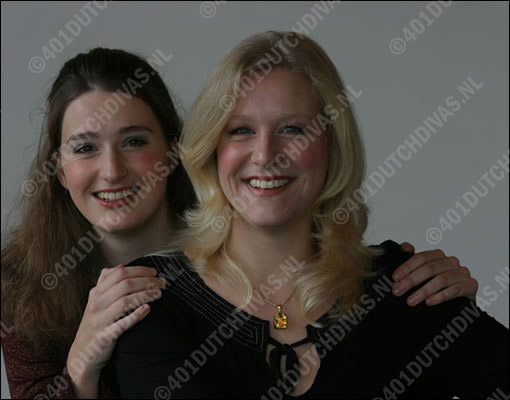 Recently, they sang with the orchestra ‘Camarata Amsterdam’ in the Concertgebouw Amsterdam. Charlotte is also engaged by Opera Köln to sing in E. Cavalieri’s ‘Rappresentazione di Corpo et di Anima’ and Ravel’s L’Enfant et les Sortilèges’, ‘Die Ehe im Kreise’ (E. Künneke) with the WDR Radio Orchestra. After graduating from the Academy of Music in Utrecht , she continues her studies in Köln with Edda Moser and Henner Leyhe. To make this possible, Charlotte received a grant from the VSB-Bank and the Prins Bernhard Culture Foundation. Josefien finished her studies in Amsterdam and is engaged by 'Junge Kammer Oper Köln'.

On Charlotte & Josefien's personal website you will find more information and also some video fragments.