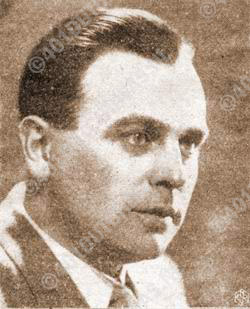 Johan Lammen, born on November 9th, 1901, studied singing at the Amsterdam Conservatory with Di Teves-Moorlag and Rose Schönberg. He started his singers-career as concert- and oratorio-singer, a.o. in the St Matthew Passion. On December 1th, 1933 he performed with the company Opera Studio (of the Nederlandse Operastichting), in the Amsterdamse Stadsschouwburg the role of Achillas in Gulio Cesare by G.F.Händel, that became the beginning of an opera-career. He joined the three-years opera-class of Johannes den Hertog, sang the title role in the Dutch opera Halewijn by Willem Pijper in 1935 at Rotterdam in the Groote Schouwburg, appeared with the Wagnervereeniging (Wagner society) in Lohengrin, together with class-mates as Frans Vroons (his debut), Greet Koeman, Judith Toff and Willem van Sante. In the famous Pelléas et Melisande performance of 1937 under the baton of Pierre Monteux he sang the role of Arkel (Pelléas, Frans Vroons; Mélisande, Greet Koeman). On September 1938 he sang in Le donne curiose by Ermanno Wolf-Ferrari (again a performance of the Wagnervereeniging) in connection with the 40-years jubilee of Queen Wilhelmina. In 1939 Johan Lammen was invited to join the just established Nederlandse Operastichting of Johannes den Hertog. He sang numerous great roles, such as Rocco (Fidelio, 1940), Hermann (Tannhäuser, 1941), Bartolo (Le nozze di Figaro, 1941), Colline (La Bohème, 1942), Tommaso (Tiefland, 1942), Falstaff (Die lustigen Weiber von Windsor, 1942). His final appearance was in the Dutch opera Marieken van Nimweghen (Jac. Jansen) on February 9th, 1943 in the Amsterdamse Stadsschouwburg.

Johan Lammen appeared also abroad. He died on February 28th, 1943, at the age of 42-year. Fortunately there exists a number of records of this great bass.