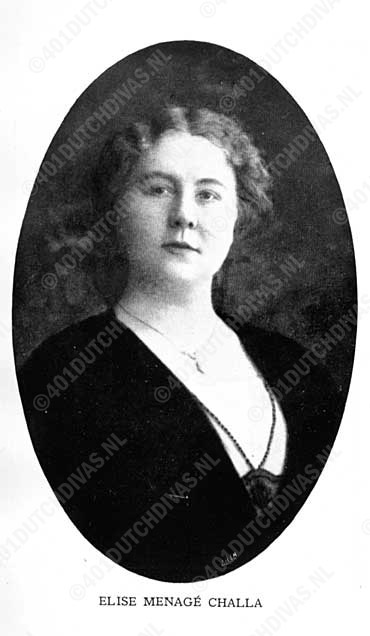 The Amsterdam soprano Elise Menagé Challa first received her singing-lessons at the 'Amsterdamse Muziekschool van Toonkunst' and later on with several foreign singing-teachers as Etelka Gerster (Berlin) - the same Julia Culp - and in Italy with Gemma Bellincioni. Her debut she made in the spring of 1914 with the role of Santuzza in 'Cavalleria Rusticana' at the 'Neue Oper' in Hamburg where she became immediately an appointment. Her debut in the Netherlands she made in Amsterdam in 1915 with an impressive performance in the 'Second Symphony of Mahler and with a lieder-evening with unknown lieder.